Read about her experience during the explosion and how she is working as a first responder to help families affected. 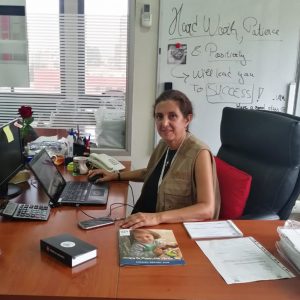 On August 4, a catastrophic explosion blasted through Beirut. Lebanon was already in a critical situation with high unemployment rates and rising poverty in the wake of a long battle with COVID-19. When 2,750 tons of ammonium nitrate exploded in the capital, it sent the country into an extraordinary crisis. Your help is urgently needed.

Project manager Eliane Abikheir from ADRA in Lebanon has lived in Beirut all her life and experienced two wars. She believes the country has never been in a deeper crisis than now.

Pictures from the explosion give a post-apocalyptic impression. To date, about 158 people have been confirmed dead and more than 6,000 injured, and it is estimated that the numbers will only increase.

Hospitals in Beirut were already at capacity due to COVID-19 and financial struggles, and the city was not equipped for another catastrophe. The port area where thousands of tons of fertilizer went into the air was central to Lebanon’s imports, including important medical equipment.

“The explosion destroyed two of the largest and most important hospitals in the whole country,” said Eliane. “We were already in a situation where health personnel lacked equipment and medicines, and the capacity of the hospitals was close to breaking point. Now we also have no main port to receive new equipment.”

When the explosion occurred, Eliane was in ADRA’s office working late with her colleague Jacqueline. At first, she thought it was an earthquake.

“I am 65 years old and have experienced many explosions in my life. But when we heard the first explosion, I could not understand what it was. It must be an earthquake, I thought. A few seconds later there was a much louder bang, glass shattered around us and we threw ourselves under a desk. Jacqueline panicked and I prayed to God. Never before have I experienced something similar,” the project manager said.

Eliane stated that she and her colleague Jacqueline were not hurt in the explosion. Unfortunately, she has lost several of her close friends to the explosion.

“I used to live by the harbor area and have many good friends and former neighbors there who are now gone. It’s incredibly sad.”

Read more about ADRA’s work and response in Beirut.

"We are in a crisis, and this time we need help."

Lebanon has now declared a two-week state of emergency across the country. Even before the explosion, which has left about 300,000 people homeless, almost half of the population lived below the poverty line.

Prior to the explosion, Lebanon had been in lockdown for several weeks due to COVID-19 and was experiencing an economic downturn. Thirty percent of the population is currently unemployed. Without money, jobs or shelter, huge crowds need immediate assistance.

Eliane describes the situation as worse than the civil war the country experienced in the 70s and 80s.

“We have never been as far down as we are now,” she said. “But when I walk around the streets, I still see people who want to help each other, who distribute water and food and who try to build houses again, not only for themselves but also for others. The only positive thing about this crisis is to see how many people want to help. It helps to know that we are not alone.”

“We are in a crisis, and this time we need help. People need both very basic things like food and water, but also funds to be able to rebuild houses and get shelter. Most people here have not given up, but they cannot do it alone. It is an extraordinary situation,” Eliane emphasized.

ADRA will continue to collaborate with local authorities and partners in Beirut to offer relief. You can help families affected by crises like the Beirut explosion by donating to ADRA’s emergency fund.